US Climate Policy Caught Between Two Worlds—Are We Smarter Than Buridan’s Ass? 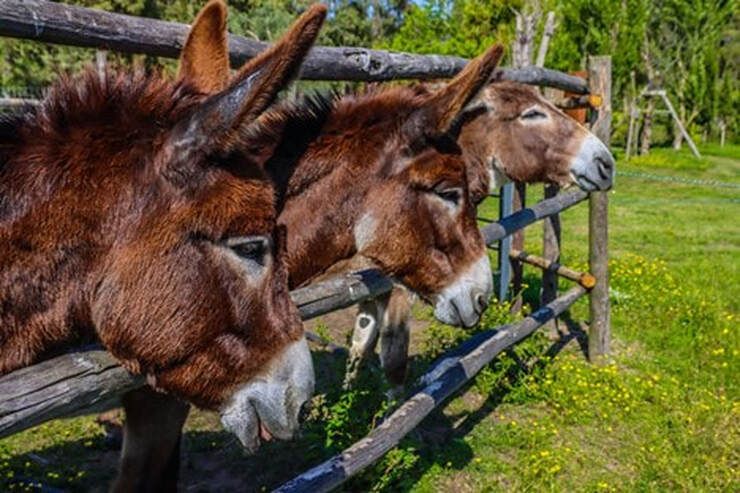 …a man, being just as hungry as thirsty and placed between food and drink, must necessarily remain where he is and starves to death.
Aristotle, On the Heavens, (c.350 BCE)

The nation has a decision to make. Is it ready to choose between fossil fuels and cleaner alternatives like solar and wind? Or will it continue to postpone the decision until the impact of Earth’s warming becomes so severe as to make it impossible to step back from the environ-mental brink?

It’s a question whose answer cannot be hedged, as it has been for decades.

*****
A 14th-century philosopher, Jean Buridan, is given credit for positing the paradox of free will. Buridan pilfered it from Aristotle, who offered the scenario as a belittling response to the Soph-ists’ claim that Earth was circular—but stationary—because of equal pressures exerted all along its surface.
The Frenchman changed the paradox from a man between food and drink to a donkey standing between two equally appetizing bales of hay. The end is the same—death by starvation.

Buridan’s Ass, the name given to the paradox, is said to starve because it cannot decide between two equally good options. Why? Because—the critter lacks free will and, therefore, is unable to make a rational choice.

Buridan’s words have been translated this way:

Should two courses be judged equal, then the will cannot break the deadlock; all it can do is to suspend judgment until the circumstances change and the right course of action is clear.

There are multiple variations of the paradox. Whatever the version, the lesson’s the same—neither the Frenchman’s ass nor the Grecian’s man will die because, at some point, they will exercise their free wills by going to one or the other of the options.

Al-Ghazali, a 12th century Persian Islamic scholar, applies the paradox to human decision-making when he posits that a man in front of two strongly desired dates will ultimately choose because of an innate ability to differentiate between two similar things.

As with most things having to do with human and animal spirits, there’s a but for lurking in here somewhere. The move towards the common good will always occur but for ignorance or some other impediment.

Is Al-Ghazali right when it comes to climate change? Are we the people innately able to differentiate between two similar things? Before that question can be answered, another one needs to be considered.

Are fossil fuels and clean energy alternatives equally attractive choices as Aristotle’s food and water, Al-Ghazali’s dates, or Buridan’s bales of hay? The answer depends on one’s point of refer-ence. Would an economist see the options differently than a climate scientist, for example?

These days wind and solar are the preferred choices of both economists and scientists. There’s never been much disagreement over the environmental benefits of solar and wind when compared to coal or even natural gas.

The arguments about solar and wind have primarily been about their reliability and relative cost. According to data recently released by the Federal Energy Regulatory Commission (FERC), wind and solar resources provided 93.84 percent of the new electrical generating capacity added in the US during the first four months of 2021.

Renewables combined are now 25 percent of total US generating capacity. Moreover, FERC predicts that by 2024 solar and wind will provide nearly four times more new generating capacity than natural gas. This trend is expected to continue in the near, mid, and long terms, especially when new and cheaper storage options are added into the mix.

New and existing clean energy technologies aren’t just about the electricity they produce—whether to light and heat homes, run industries, or power automobiles. Economists see these technologies as the source of sustained economic growth. It’s a view shared by an increasing number of corporate planners.

Fossil fuel interests becoming marginalized by the marketplace are the only groups refusing to concede that sustainable clean technologies are the preferred option. Those interests include coal mine owners and coal-state political representatives in Washington and state capitals. Even the United Mine Workers of America are embracing---albeit tentatively—President Biden’s plan to decarbonize the economy.

US decision-makers have for decades attempted to support both clean energy technology and fossil fuels through public policies. Buridan would say that policymakers have suspended judgment because the right course of action hasn’t been clear. Now it is—or should be.

The US, like every nation on Earth, is aware that the planet is heating. We know too that the globe’s warming carries with it severe consequences. They include more frequent and fierce storms, historic droughts in Africa and the western states of the US and elsewhere, flooding in other areas, the loss of wildlife habitats due to forest fires as far north as the Arctic Circle and south as the Amazon.

With more than reasonable certainty, we know that fueling Earth’s warming are greenhouse gases, e.g., carbon and methane, being released into the atmosphere.  It’s fair to say that from where most climate scientists sit, clean energy sources and fossil fuels are not equally attractive options.

Why aren’t US policies more aggressive in supporting clean energy alternatives and more opposed to fossil fuels—all fossil fuels? According to the philosophers, the reason is either ignorance or some other impediment.

The impediment is, of course, political pressures from multiple quarters much like those the Sophists thought kept Earth still. What needs to happen now is a move—a deliberate no going back—move away from fossil fuels.

The nation can no longer postpone the decision as the world comes ever closer to the environmental brink. Under any scenario that correctly recognizes the cause and consequences of climate change, it will take time to halt the use of coal, natural gas, and oil entirely.

The amount of available time, however, is not open-ended. Time, as the lawyers say, is of the essence.

At the national level legislation, that supports coal and other fossil fuels needs to be withdrawn, and no new support should be given. It includes the passage of carbon taxes that let fossil fuel companies off the hook for the damage they’ve done or from adhering to existing environmental regulations.

Also included should be granting any new permits to pipelines other than those needed to transport renewable fuels such as biodiesel and biomethane. Other permitting activities, including export terminals for LNG and coal, must also be stopped. Offloading energy sources that should no longer be used domestically is not an answer to the global problem for which the US bears significant responsibility. It only delays the inevitable.

Buridan’s paradox is about the choices we the people have and are making on everything from electricity production to the foods we eat and the methods we use to transport ourselves and our industrial products. Earth has no free will. She will act naturally in response to what has and is being done to her by us humans.

There’s no favor to be done either to the environment or the economy by holding needed legislation hostage to bipartisanship when one of the parties refuses to recognize that the common good is best served by a move to sustainability for purely political ends.

The US can no longer afford to suspend judgment on the matter of fossil fuels. Believing the options equally appealing flies in the face of the mounting evidence of the causes and conse-quences of climate change. Equipped with such knowledge, the critical question for we, the people, to answer now is whether we are any smarter than Buridan’s ass.