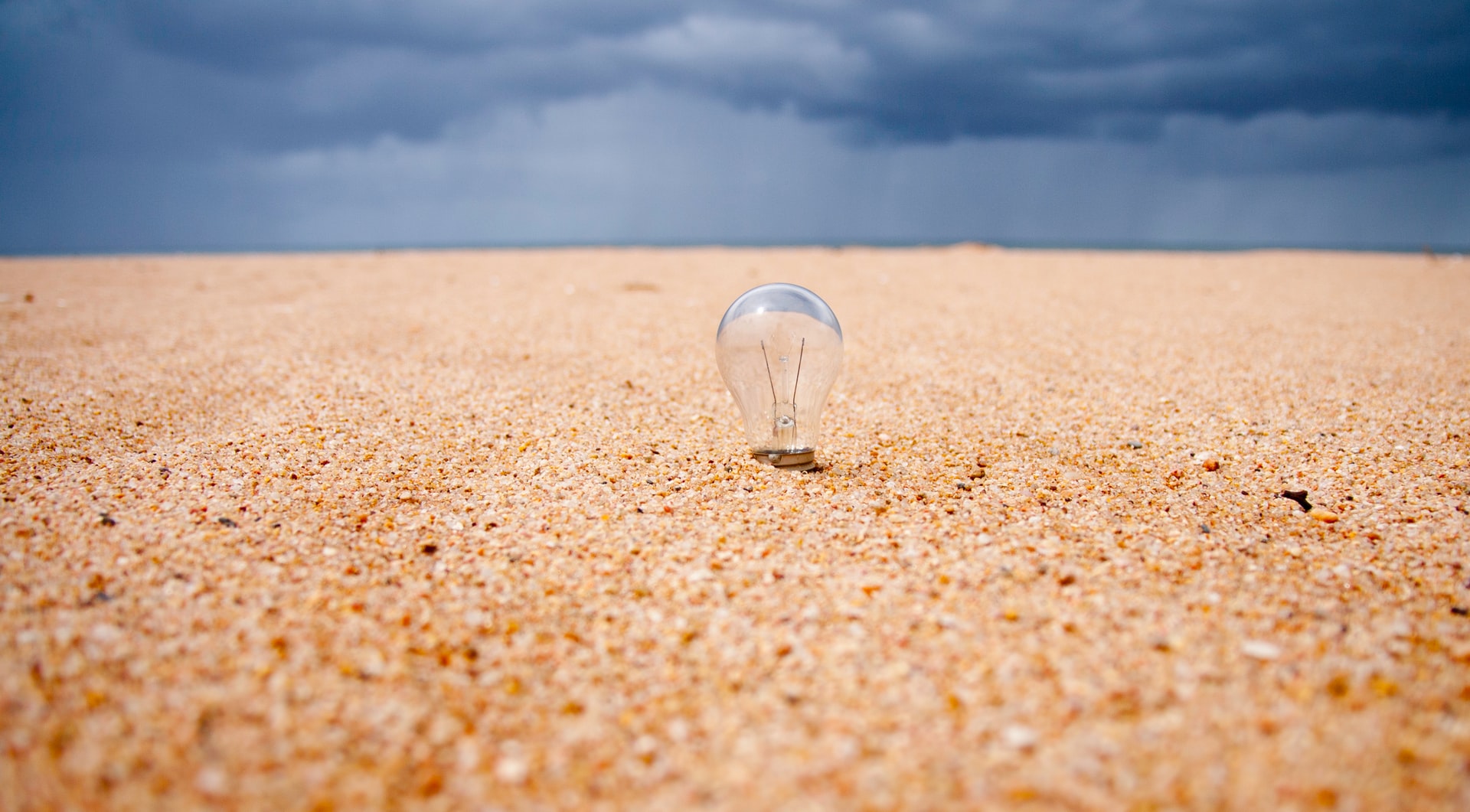 Don't you just love it when the solution to a problem hits you—suddenly the fog lifts, the trumpets blare, you're bathed in uplifting light, and your inner voices yell in unison—well, duh?

I had just such a moment the other morning when through sleep encrusted eyes, it came clear to me. The transcendent problem with negotiating climate policy is—there's no tomorrow.

I realize this is hardly the equal of a Damascus road conversion and that on the international epiphany scale, it would rank no higher than a 2 or 3 out of 10. Still, it can bring some clarity to the problem of why our nation's politicos appear so inept when it comes to enacting the policies required to rise to the challenges of Earth's warming.

When I say there's no tomorrow, I'm not speaking euphemistically of the food insecurity suffered by ten percent of Earth's population, the next great extinction of animal and plant species on Earth, or the estimated tens of millions of migrants, who annually are being forced from their lands because of too much or too little water, or the other dystopian consequences that await if our politicians continue to fail us.

No, what I'm musing about is the nature of today's politics. As if it wasn't clear before, the pandemic has shown us that demagoguery now trumps everything else in today's political world—including facts and party affiliation.

Trump has completely taken over the Republican brand. To be cast as a loyal Republican, one must first be recognized as a loyal Trumpeter. These days, the test of a true Republican is the willingness to put truth aside and agree Biden is a usurper who should be denied the presidency even now.

At the moment, the Democrats lack a Trump-like leader. Since the 2016 election, Bernie Sanders has served as a sort of demagogue-in-waiting. Biden's swift reversal in the primaries and his election has tamped down the rise of a charismatic leader from within the Democratic ranks.

The progressives in Congress—especially on the House side—are serving the galvanizing function that a leader of the pack might otherwise fulfill. Should the Democrats somehow manage to keep their majority status in the House and Senate after the votes are tallied on November 8, 2022, it will be because of the passion of progressives—a passion equal to that of Trump Republicans.

Historically voting falls off in midterm elections. Although if the recent elections for Virginia governor and Assembly are any indications, 2022 is likely to play out as a year of political passion plays. It will make turnout the difference between winners and also-rans. The biggest enemy of the Democrats in 2022 will likely be apathy.

The Democrats will also be confronted by history, as a sitting president's party doesn't do well in midterms. Obama saw the Democrats lose 63 House and six Senate seats in the 2010 off-year elections.

The defeat was second only to the 1938 elections in which the FDR and the Democrats lost 81 House and seven Senate seats. Invariably a president whose party loses control of Congress is forced to go it alone and govern by executive orders—an impermanent alternative to the passage of legislation.

It's more than a trifle ironic that the very moderate President Biden has put forth a very progressive policy agenda. It's also telling that House Speaker Pelosi and Senate Majority Leader Schumer have—along with Bernie Sanders—become the principal defenders of that agenda. Why, you ask?

In part, their support for aggressive policies and programs is a bargaining ploy. I'll ask for twice what I really want, knowing that I'll only get half.

In part, too, they are attempting to compensate for lost time. Trump's time in office saw many of the Democrats' favored policies, programs, and regulations get flushed down the political drain—especially vulnerable were any put in place by executive order. The rescission of Obama's Clean Power Plan (CPP) is an example of the vulnerability of government by executive fiat.

The pressure to get things done now being felt by Pelosi, Schumer, Sanders, and Representative Pramila Jayapal, who heads the 100-member Congressional Progressive Caucus, isn't just about putting things back as they were in a pre-Trumpian time.

There's the considerable challenge of putting in place new policies in the short span of time a president and his party have to act between elections, which is the problem that Biden and the Democrats are now facing. It's a task being made all the more difficult to pull off because of Senators Manchin (D-WV) and Sinema (D-AZ).

The pair are opposed to cramming a decade's worth of programs and policies into the budget reconciliation package. Manchin has suggested that the climate and other once-in-a-generation proposals can wait until 2022 to be taken up and voted on. The coal-state Democrat seems to be looking at a different election map than his Democratic colleagues.

Nearly the entirety of Biden's promised climate and safety net programs are contained in two bills--infrastructure and Build Back Better (budget reconciliation). Whatever doesn't make it into one of these two vehicles faces a bleak political future.

The passage of legislation is not the only time-sensitive issue confronting the Biden administration. New policies mean new rules. Rule making is an arduous and time-consuming process.

It's not an exaggeration to say that rule making routinely takes two to five or more years to complete. Consider that a policy passed as part of the budget reconciliation package that requires a rule making, e.g., a tax credit, is unlikely to be accomplished before the end of Biden's first term—even under the best of circumstances.

Take, for example, the Clean Energy and Sustainability Accelerator program that appears in the Build Back Better Act (budget reconciliation). Assuming it stays in the bill and the legislation is signed into law by President Biden before Thanksgiving 2021, the program is unlikely to have a start date much before Thanksgiving of 2023.

Should the Democrats lose their majority status in either chamber of Congress due to the 2022 elections, there will be near-total gridlock in Congress pending the outcomes of the 2024 elections. Former President Trump, Senate Minority Leader McConnell (R-KY), and House Minority Leader McCarthy (R-CA) will oppose anything and everything the Democrats propose to position themselves better in advance of the 2024 general elections.

Extremism begets extremism. You This year Republicans refuse to support any legislation with a Democratic tag. The next time the Republicans are in power, the Democrats will return the favor.

There's another wrinkle to consider as well. There's bad blood flowing in the veins of Democrats. The 100-strong Congressional Progressive Caucus is not likely to forgive or forget how Senators Manchin and Sinema have stopped initiatives like the Clean Electricity Performance Program (CEPP) and an expanded child tax credit.

Progressives are taking names and numbers of "centrist" Democrats, who couldn't be counted on to support Biden's proposed Build Back Better plan. What will they do with those names, you ask? Quite conceivably, the progressives will do pretty much what Trump is doing—financing primary challengers.

Between 1970 and 1976, a Democratic Congress and a Republican president worked together to enact a series of laws, e.g., the National Environmental Policy Act of 1969 or the Clean Air Act of 1970, that are the bedrock of US climate policy. At the risk of an eye roll, allow me to suggest it was much easier to negotiate things—you know, back-in-the-day?

Two essential elements are required for such collaboration—time and trust. Both are in very short supply in today's politics. The unwillingness of Democrats to trust either Republicans or their own has made the negotiations over the infrastructure and budget bills nearly impossible.

The magnitude and complexity of climate change mean it has to be addressed steadily over time. It's too big a problem to solve with one bite of the apple.

The infrastructure and soon the budget reconciliation bills are the largest ever passed in US history, and they are only a modest down payment on. What's going to happen when even these once-in-a-generation appropriations are too small to attack an increasingly dire situation?

Even if money wasn't the issue, will there be trust and time enough to solve the problem when it finally becomes too much for everyone to ignore? By then, it could be too late.

It’s not as if climate problems can be turned off with the flick of a switch. How do you rechill the Arctic, or protect the cities of New Orleans, New York, or Miami from rising sea levels in day or two? Is there a shortcut to trust?

The way to save a tomorrow is by acting today

In any event, now that the problem is clear, I’m sure good answers will be along in short order.

I've found over the years that solutions often pop up in dreams. So, with winter coming on, I've set myself the task of sleeping more in hopes that my next epiphany will show me the solutions as clearly as it has the problem.

Turn the light off on your way out the door, please.