Juliana v. US: Children Standing at the Crossroads 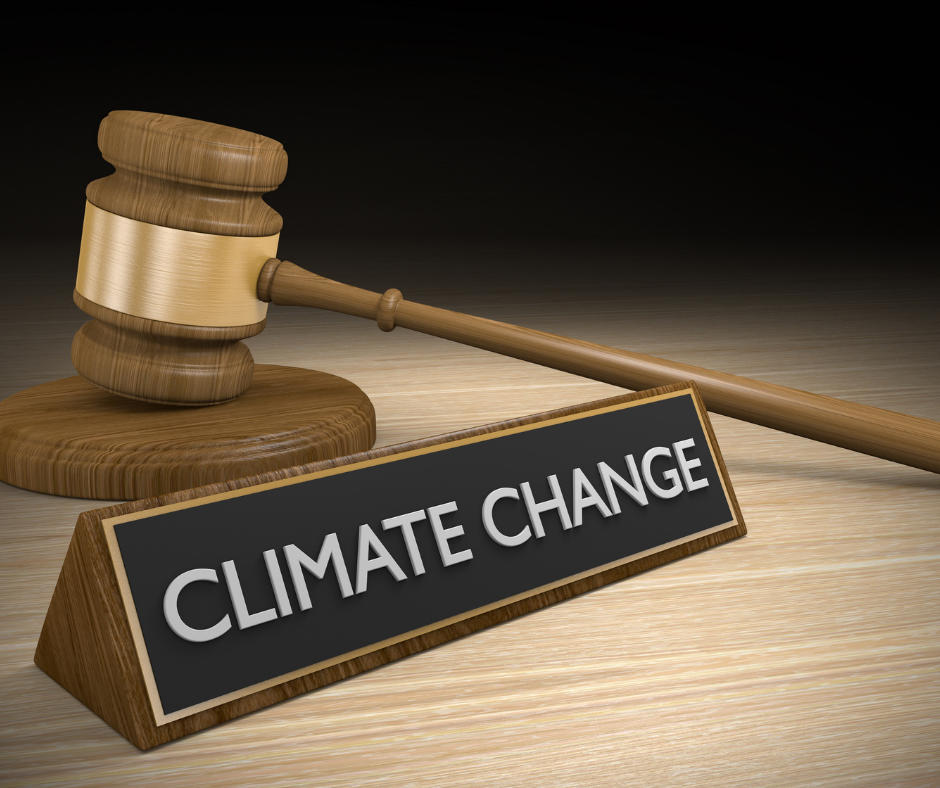 Exercising my ‘reasoned judgment,’ I have no doubt that the right to a climate system capable of sustaining human life is fundamental to a free and ordered society.    - US District Judge Ann Aiken

More than five years ago, 21 youths ranging in age from 8 to 19 asked a federal court to declare a habitable environment a protected right under the US Constitution. Early on. Juliana v. US was often reported with a wink and a nod giving the impression it was a feel-good human-interest story about kids. Nothing could’ve been further from the truth.

As it survived one legal challenge after another, the case came to be recognized for what it could be—the most important environmental law case of all time. One equal in stature to Brown v. Board of Education (school desegregation), Roe v. Wade (a woman’s right to an abortion), and Obergefell v. Hodges (the right of men and women to marry those they love even if of the same sex).

The Juliana plaintiffs have accused the federal government of violating their constitutional rights to a safe and habitable environment. They base their allegations on the government creating and maintaining a national energy system powered by fossil fuels long after it knew of the damaging consequences to the health and welfare of all Americans and on the nation’s natural resources. It’s a charge not unlike the one used in the tobacco cases of the 1990s and the damage lawsuits now being brought by state and local governments against oil companies.

The environmental trial of the century now looks as if it is not meant to be.

A little more than a year ago, a divided three-judge panel of the Ninth Circuit Court of Appeals ruled the Juliana plaintiffs didn’t have standing, i.e., the right, to pursue their case in federal court. The ruling was based on the majority’s opinion there was nothing the court(s) could do to redress the legitimate harms they had suffered:

Reluctantly, we conclude that such relief is beyond our constitutional power. Rather, the plaintiffs’ impressive case for redress must be presented to the political branches of government. (emphasis added)

As has been their wont, the plaintiffs and their attorneys refused to take “no” for an answer. They filed a petition for an en banc hearing in which 11 of the judges on the 9th Circuit Appellate bench would reconsider their arguments and hopefully grant the plaintiffs standing to have their constitutional claims heard and decided by a court of law.

Days ago, the 9th US Circuit Court of Appeals denied the youths’ petition to reconsider the three-judge panel’s January 2020 ruling. The attorneys at Our Children’s Trust and the 21 plaintiffs are again refusing to take “no” for an answer. They have announced their intention to petition the US Supreme Court (SCOTUS) in hopes of being granted the legal right to have their case heard.

Notwithstanding over five and a half years of hearings, the Juliana plaintiffs have yet to be granted the standing to sue the federal government for its failures to protect the environment and its support of fossil fuels. In essence, the game is yet to be afoot.

A president—even one with Biden’s commitment to addressing climate change—can’t meet the demands of the Juliana plaintiffs through executive orders.

A lot has changed since the Juliana plaintiffs and their attorneys at Our Children’s’ Trust first walked into a federal courtroom. Consider, for example, that the federal defendant in the case has changed three times since September 2015.

Initially, the Obama administration was charged with violating the youths’ alleged constitutional right to a safe and habitable environment. For the past four years, it was Trump and company they faced in court; and now, of course, it is the newly installed Biden administration that’s on the hook to respond to their charges.

As different as these administrations may be, they all agree it is not in the executive branch’s interest to lose the Juliana case and for reasons much like those that have led the courts to deny the plaintiffs the standing to sue.

Before a plaintiff is allowed to pursue a remedy in federal court, they must first establish they have the right, i.e., the standing, to seek the court’s assistance. Standing is granted based on the answers to three questions:

All questions must be answered in the affirmative—two out of three won’t cut it.

The three-judge panel reluctantly denied the Juliana youths standing. Why reluctantly? Because they understand climate change to be the problem the plaintiffs took pains to document. Although far from fulsome, even the Trump administration accepted the youths’ claims of the seriousness of Earth’s warming—not just to current generations but to those yet to be born.

The Juliana plaintiffs, the courts, and the federal government part ways on the third leg of the standing stool—the ability to redress the recognized harms. To be sure, the scale of the requested remedy is part of the court’s reluctance.

Petitioning SCOTUS is not without significant risk for the entire climate community.

The plaintiffs are asking a federal court to order the executive branch of government to undertake a massive reordering of the economy to achieve the magnitude of greenhouse gas reductions that science says is required to keep on the right side of the 1.5 degree Celsius threshold. A threshold beyond which much of the damage, e.g., a second great extinction and large reductions in arable lands that threaten food security, cannot be undone.

Readers having trouble conceiving what’s needed to keep temperatures below 1.5 degrees Celsius are encouraged to think of the Green New Deal or President Biden’s proposed $2 trillion climate strategy. A court’s ordering the federal executive branch to accomplish a retooling of the US economy of such magnitude wouldn’t get us there.

A president—even one with Biden’s commitment to address climate change—can’t meet the demands of the Juliana plaintiffs solely through executive orders. There are practical, political, and legal limits to what any presidential administration can accomplish through executive action.

Funding the transition is one of them. As the Trump administration found, there are legal problems with a nation’s chief executive using funds Congress appropriates for one thing on another. The Constitution’s separation of powers means a president can’t order Congress to do anything.

Even as they pertain to the executive branch, one president’s directives can be rescinded by a successor as easily as they were initially issued. Practices that are hardly conducive to bringing the nation back from the brink of a climate catastrophe with programs and policies like Biden’s climate defense proposals.

In its purest form, the question being debated in Juliana is whether the matter is a question of law or politics. Both judges and presidents have argued the issue of a sustainable and habitable environment is political—leaving it up to Congress, the president, and voters to answer.

What’s the harm of asking?

The Juliana plaintiffs and their attorneys have a choice to make. Do they put hands on hips to end the jam or ask the US Supreme Court to review the latest appellate court decision—hoping finally to be granted standing to pursue their case at the trial court level?

As I’ve already mentioned, things have changed since the Juliana plaintiffs first walked into the federal district court for Oregon. The greatest of these—greater even than changes in administrations--and the one that poses a substantial risk to the climate action community is the decidedly current conservative composition of the US Supreme Court.

The risk associated with the high court reviewing the case is that they may also choose to use it as an opportunity to reconsider the  Massachusetts v. EPA decision. The case established both the right of EPA to regulate greenhouse gas emissions and of a state to challenge the federal government’s failure to do so under the Clean Air Act (Act).

Legal experts worry that conservative justices could use Juliana as an opportunity to limit the standing of both citizens and states to sue the federal government under the Act. A possibility that Michael Gerrard, director of Columbia Law School’s Sabin Center for Climate Change Law, has called a nontrivial risk. A risk that others agree could have damaging consequences on future climate cases.

The Massachusetts case was a five to four decision largely along liberal/conservative lines. Justice Kennedy was the deciding vote. Justice Kavanaugh now fills Kennedy’s seat on the high court bench.

Chief Justice Roberts and Justice Scalia were two of the four dissenters. Scalia took issue with the majority’s dismissing EPA’s determination that it lacked authority under the Act. His replacement on the Court is Justice Gorsuch. Robert’s dissenting opinion was specific to standing and the ability of the courts to redress climate-related harms.

This Court’s standing jurisprudence simply recognizes that redress of grievances of the sort at issue here “is the function of Congress and the Chief Executive,” not the federal courts.

It has always been that whatever happened in Juliana it would have an impact beyond the case itself. A finding for the plaintiffs would offer the Constitution’s protection not just to the 21 youths but to the nation—its people and its natural resources. However, even without that finding the Juliana plaintiffs have already made a significant contribution to the climate cause.

They have focused public attention on the issue of Earth’s warming framing it as a generational issue—a theme that resonates with older generations despite their political leanings. The case has also spawned other suits both within and without US borders.

Of course, it is up to the youths and their attorneys to decide whether they have scored enough victories over the past five-plus years to now walk away with no regrets. They’ve more than earned the right to make a final federal appeal.

Whether the transition to a low-carbon economy is a legal or political question, the answer is what it has always been—the working together of legislative and executive branches of governments. The time is too short, and the problem too great to have the branches pulling in opposite directions.

SEO phrase: Should Juliana be appealed to the Supreme Court legal experts worry conservative justices could use it as a chance to limit the standing of both citizens and states to sue the federal government under the Clean Air Act. A risk they consider nontrivial.