An Interview With Fridays for Future Pakistan 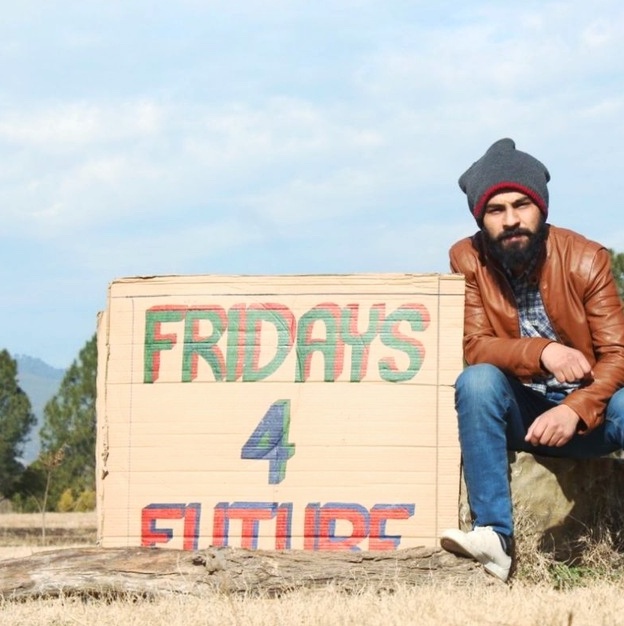 I met Kamran on Twitter, and after a few brief messages he agreed to chat with me on video call. We met early one Thursday morning - 7am my time, 4pm his time. Our connection was spotty at best, the mountains in his region no doubt knocking our signal around.

Kamran’s passion for climate change led him to become the co-founder of the Pakistan chapter of Fridays For Future (FFF). He also is in a country that is experiencing the brunt of the effects of climate change. Pakistan contributes less than 1% of the world’s greenhouse gases, and yet it now finds itself in the top 10 climate vulnerable countries. It is consistently plagued by flooding, glacial melting, heat waves, and drought.

I started by asking Kamran about his educational efforts to combat climate change. “Striking and resistance are not our goal here. Education is the key to building society in a positive way,” he said, going on to explain the warm and positive reception he and his groups have experienced at local schools, businesses, and organizations. There, he and his group teach about climate change causes, effects, and how to combat these changes. “Reception has been good,” he states, “The education is appreciated. Now many of the youth are joining us and want to become part of our movement. Other organizations are requesting education from us.”

Kamran’s educational efforts also focus on the most vulnerable populations: women and children. Pakistan is still a heavily male-dominated society. And part of FFF’s goals are to address other social injustices such as racial and gender inequality by fighting climate change.

With my limited knowledge of Pakistan, I expected Kamran to speak about the strong resistance he experiences from the government and other officials. I couldn’t have been more wrong. “Pakistan now has one of the most pro-change attitudes in terms of climate change,” he said. “Our government is changing their policies, planting trees, and creating climate change campaigns.” I can only wish that my own government would be as proactive. The Pakistan administration recently announced a new electric vehicle policy this summer and plans to get ⅔ of its electricity from wind, solar, and hydropower by 2030. Some of its policies are being viewed with trepidation, but per Kamran they’re headed in the right direction.

Climate deniers are a big deal in the USA, and as Kamran told me, the same types of people are his biggest opposition in Pakistan. “These people, they bury themselves in their religion and think that these terrible things that happen are coming as punishment for our bad deeds. We try to educate them that this is not an issue of religion, but of science.” (Ironically, climate change is a direct result of our deeds, albeit not strictly immoral ones.)

As we wrapped up our call, I wanted to hear if Kamran had any advice for others in their fight against climate change. “We all need to work together in order to survive,” he says. “Everyone should be fighting against climate change and be responsible for what they are doing as individuals while thinking about the bigger picture. We all have to live here. Treat nature and our world with justice and respect.”

If Covid allows, Kamran and his FFF groups will be marching on September 24th as part of a world-wide strike to demand climate justice.

Kamran is the co-founder of the Pakistan chapter of Fridays For Future. He resides in Gilgit Baltistan, the mountainous region in North Pakistan. Kamran has his Bachelors in developmental studies and also serves as the President of Pakistan Youth Congress. Kamran’s interest in climate change comes from personally experiencing it’s devastating effects in his local area in the form of deforestation, homelessness due to flooding, loss of animal habitat, excess use of plastic, barren lands and droughts, and the current heat waves sweeping the world.

As a result of climate change, the climate of Pakistan has become increasingly volatile over the past several decades and is expected to continue in the future. Effects include increased heat, drought, extreme weather conditions, and the melting of glaciers causing devastating flooding. Pakistan contributes little to nothing in the form of global greenhouse gases yet experiences the brunt of emissions from neighboring India and China, both industrialized countries. The country has an estimated literacy rate of 59%, with less than 47% of women being literate. In comparison the USA has a literacy rate of 99%. Fridays for Future and Kamran Ali feel that education is key in addressing not only climate change, but other injustices such as racial and gender inequality experienced in the country.